Spend $75 more for free shipping on your order.
0
< Previous Page

(No reviews yet) Write a Review 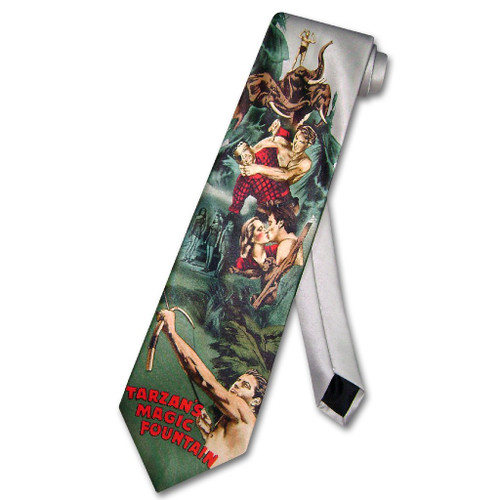 This is a BRAND NEW TARZAN'S MAGIC FOUNTAIN NeckTie.

This neck tie is a Ralph Marlin tie.

This is a great tie for a fan of Tarzan.

Tarzan's Magic Fountain is a 1949 adventure movie starring Lex Barker as Tarzan and Brenda Joyce as his companion Jane. The film also features Albert Dekker and Evelyn Ankers, and was co-written by Curt Siodmak and directed by Lee Sholem.

This was Barker's first appearance as Edgar Rice Burroughs' ape-man, while Joyce had played Jane opposite Johnny Weismuller as Tarzan in four previous films. She was one of only two actresses to portray Jane in movies with two different actors as Tarzan. (The other was Karla Schramm in the silent era.) Tarzan's Magic Fountain was Joyce's final turn in the role; different actresses played Jane in each of Barker's four subsequent Tarzan movies (Vanessa Brown, Virginia Huston, Dorothy Hart, and Joyce MacKenzie). Elmo Lincoln, who had been the first screen Tarzan three decades earlier, appears, uncredited, as a fisherman repairing his nets.

This is a standard length tie which is 56 inches long and 4 inches wide at the bottom.

We have more variety of Neckwear NeckTies in our other listings.

Check out our other Neck Ties.

Need help with tying your Neck Tie? See our style guide article on How To Tie a Tie

No Product Reviews Yet